Sew Over It Alex Shirt Dress 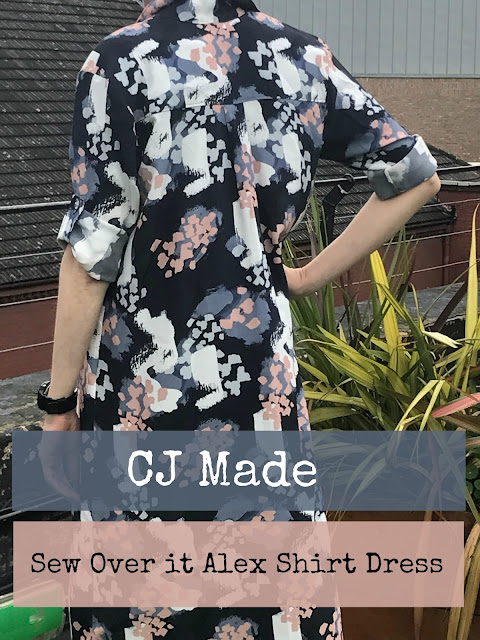 I signed up to the Sew Over It Alex Shirt Dress class when there was a 20% off everything promotion a while ago. I opted for the Islington branch as it is much nearer where I live and work. I bought it as an end of term treat after a crazy academic year. I have the skills to make this dress without the need of attending a class but I wanted to use a drapy viscose fabric and I thought it would be nice to have some hand-holding along the way.

Enter the fabric. A fabulous viscose from Stoff and Stil which I bought a while ago after Karen, Foldline, Jane and a whole bunch of other lovely sewing bloggers visited the headquarters and were given a discount code for everybody to use. It is an abstract print with dark charcoal grey, navy, black, white and pink splodges, brushmarks and dashes all over it. I love it. It also has a good weight to it as well.

I began by making a few alterations on the paper pattern straight away. As with all patterns I added 4cm to the sleeve length (even though the style is to roll them up). I also moved the pocket placement up by 2cm because it seemed to sit better on my bust area. The length of the shirt dress is very long even for my 172cm height standards so I left that as it was. 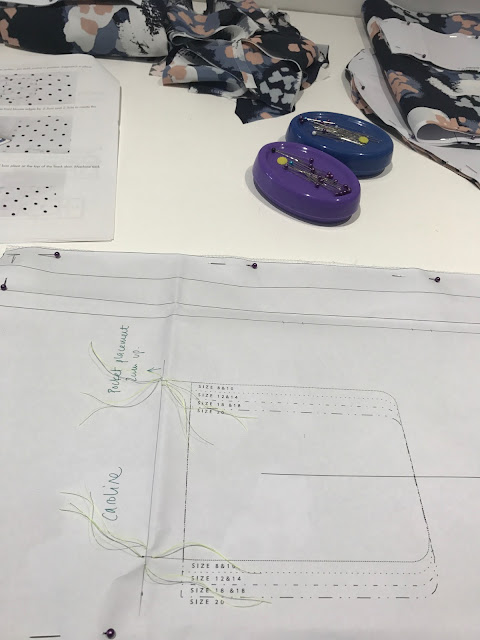 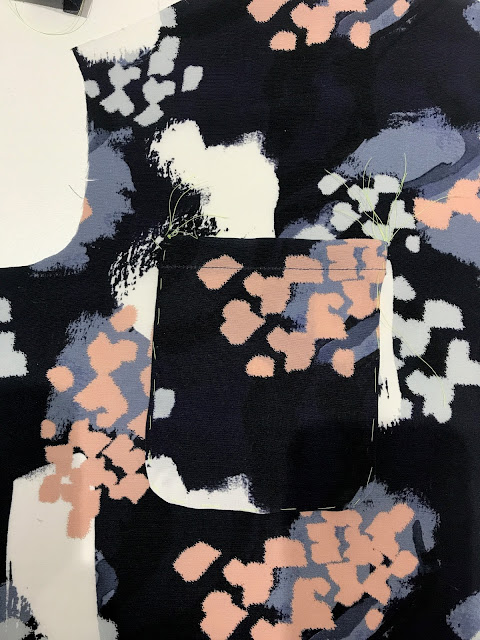 Before I cut out the pattern I pinned the selvedges of the folded fabric all the way down the length to keep it from slipping. This helped enormously when cutting out the shirt back which is on the fold. You could alternatively cut them out flat. I took my time with the construction of the shirt. Pinning then hand basting carefully to avoid any slippage of fabric. I think my efforts paid off as I really like the final dress. 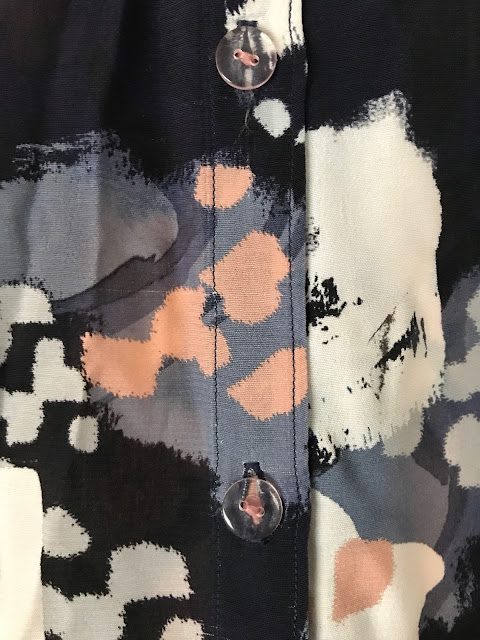 I am really happy with my choice of buttons. I took a trip to Ray Stitch in Islington as I know they have a very good selection of buttons. I wanted something very plain and had chosen completely colourless buttons when at the last minute I spotted these soft pink translucent versions of the same button which I think works SO much better. I used some pink thread from my grandma's stash to continue the pink theme!

The hem was finished with self-made bias tape which took quite a while to make and I will cover that in another blogpost as I took step-by-step photos along the way.

Finally, the finished dress. I styled it with and without a belt and I think I prefer the silhouette in this particular fabric with a belt.
What do you think folks? 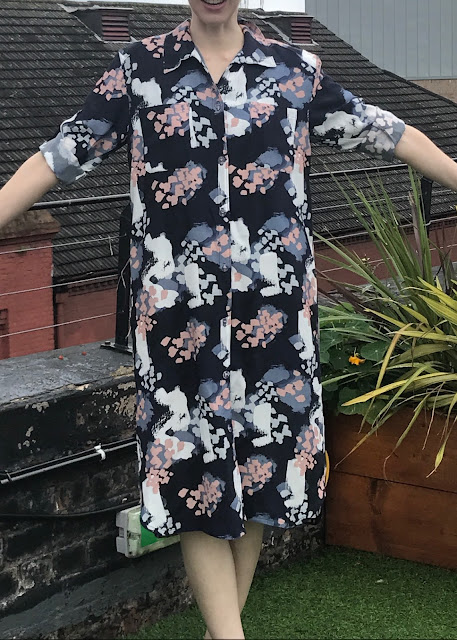 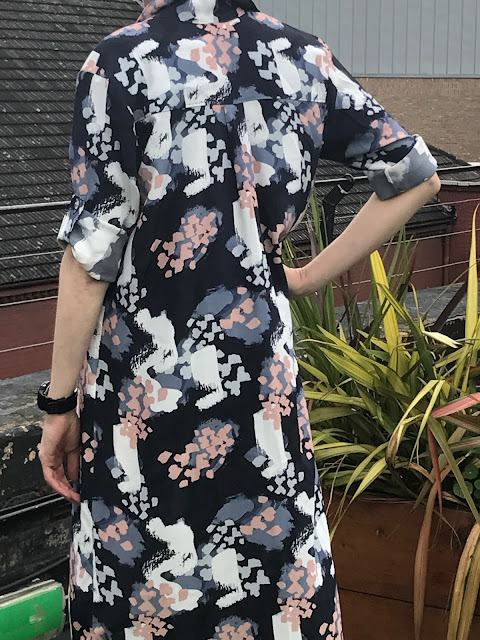 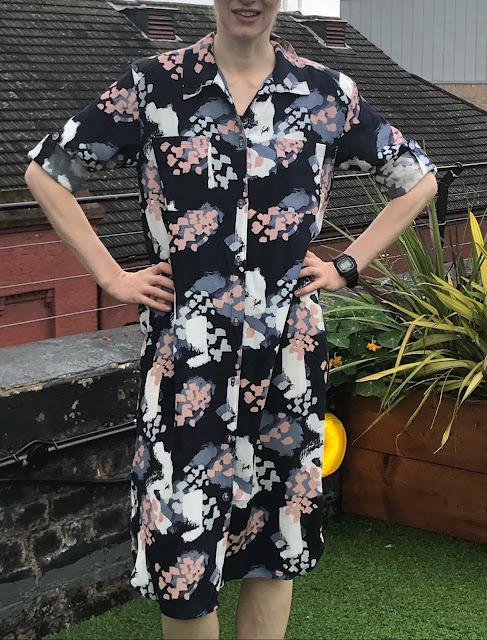 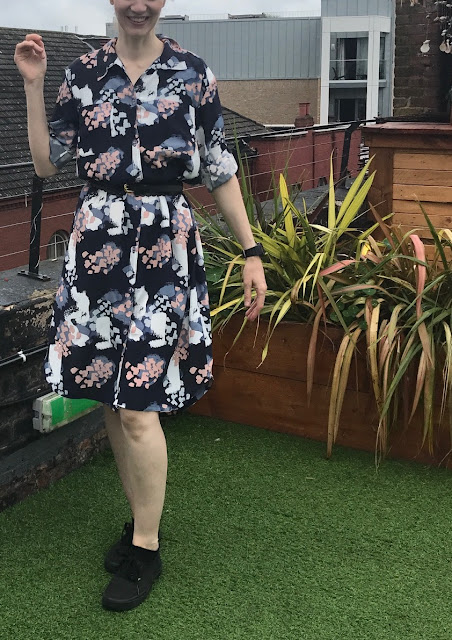 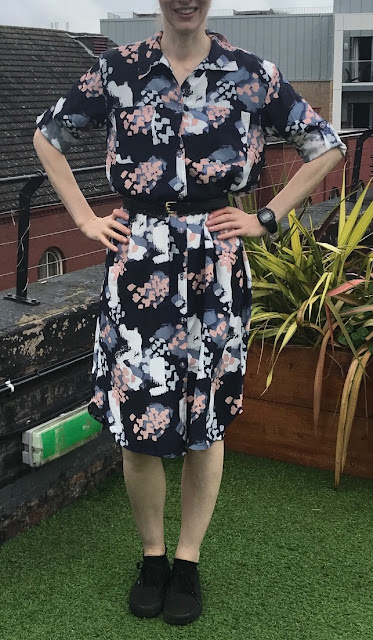 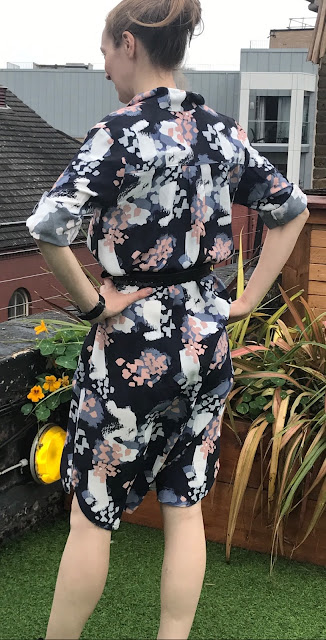 I will certainly make another Alex Shirt Dress when I find the right fabric. I don't have any fluid fabrics in my stash at the moment so I will keep an eye out for just the right one over the next few months. I am not in a hurry to buy any new stuff though as I have a whole heap to use before I can allow myself to buy more!
Posted by Caroline at 08:56

Email ThisBlogThis!Share to TwitterShare to FacebookShare to Pinterest
Labels: Alex Shirt Dress, Sew Over It, Stoff and Stil