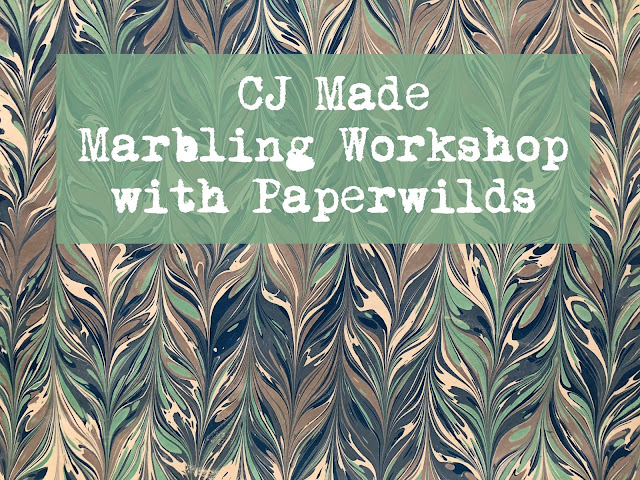 I booked myself onto an Introduction to Marbling workshop with Paperwilds at the Elizabeth Industrial Estate in South Bermondsey as soon as the school term finished at the end of July. I spent the day learning the historic method of paper marbling using techniques that date back to the 12th Century. 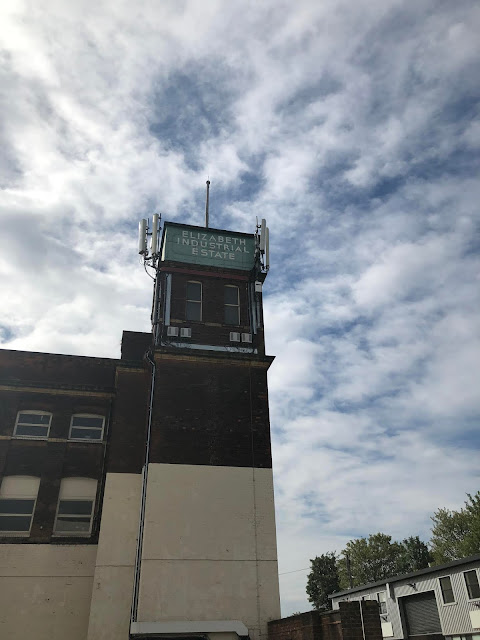 Freya who is the creative mastermind of Paperwilds runs a studio in on old tea factory and shares it with her other half (a photographer) and her very friendly and docile dog, Ludo.

We started the day with a brief history of the craft and then began preparing our paper using an Allum solution which you need to coat the paper with so the marbling paint will stick. Once these papers had dried (which was quick considering the studio temperature was in the 30's) we got stuck into the marbling.
The first type of marbling we learnt is the foundation of all marbling patterns called the Turkish Stone. You select two or three colours and flick them into the marbling bath and allow the colours to spread and disperse. The marbling 'bath' contains a solution of water mixed with a specific kind of seaweed moss which creates a perfect viscosity which allows the marbling paints to sit and disperse on the surface and not drop to the bottom. When you place the paper on top you can pat it like a drum and it doesn't sink into the solution! Very clever indeed. 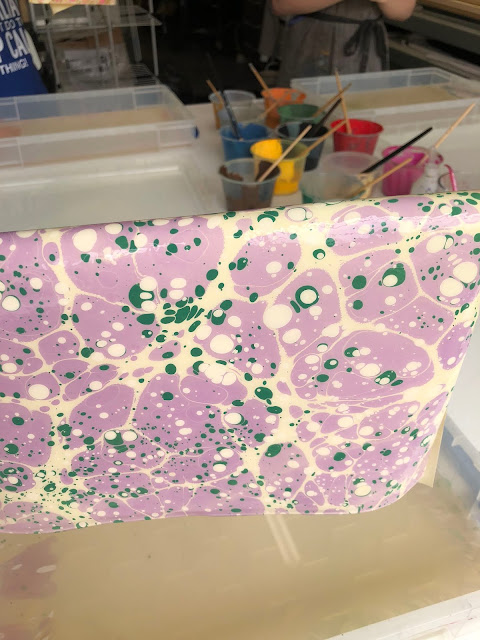 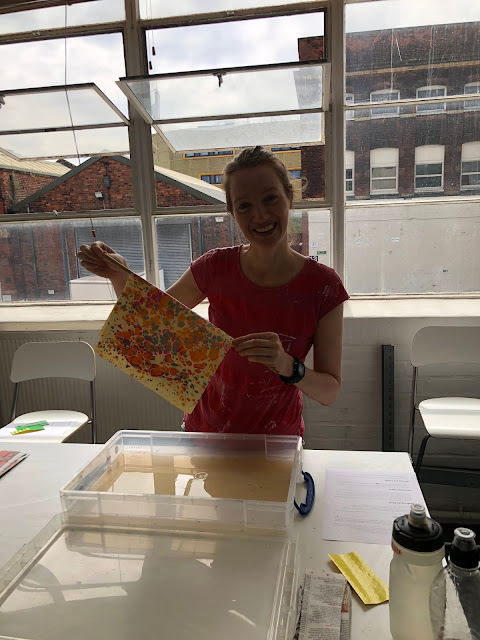 All other techniques start with the Turkish Stone and you complete different processes to create a range of amazing effects. The next one was called a French Curl where you draw swirls into the Turkish Stone at various intervals with an awl. 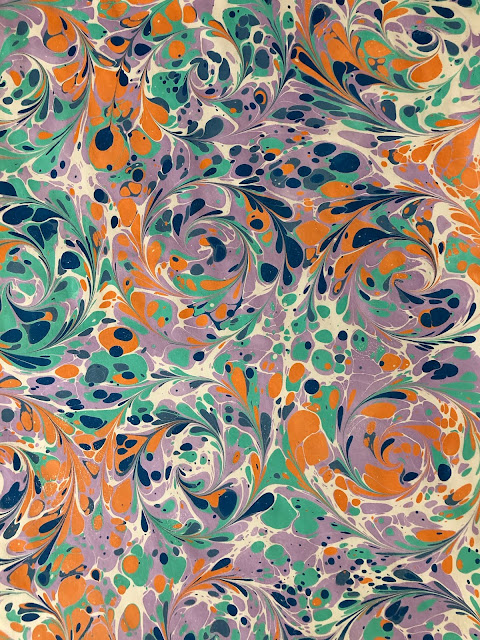 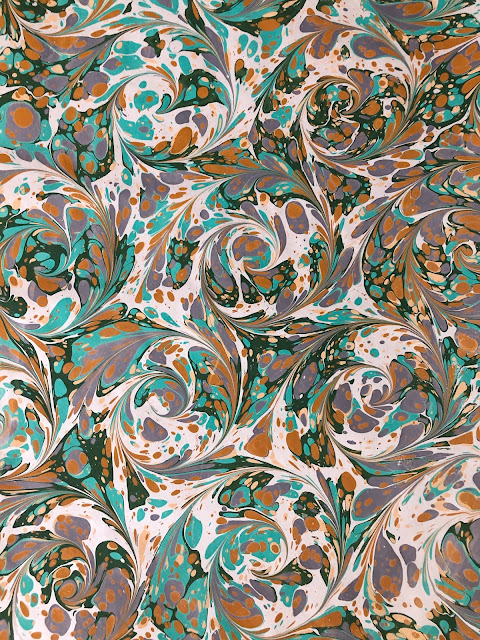 The create the next technique you draw into the inks with an awl in a continuous back and forth movement as can be seen below. It is called Gelgit (to come and go). 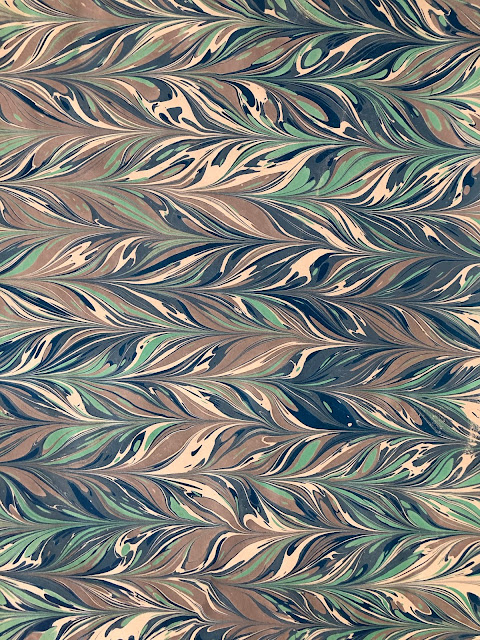 To produce the technique called Non-Pareil uses the Gelgit method as a basis and then you continue the back and forth horizontal as well as vertical as you can see below. You need to use a special tool which looks like a metal comb with spikes dispersed at equal intervals which you drag through the inks. 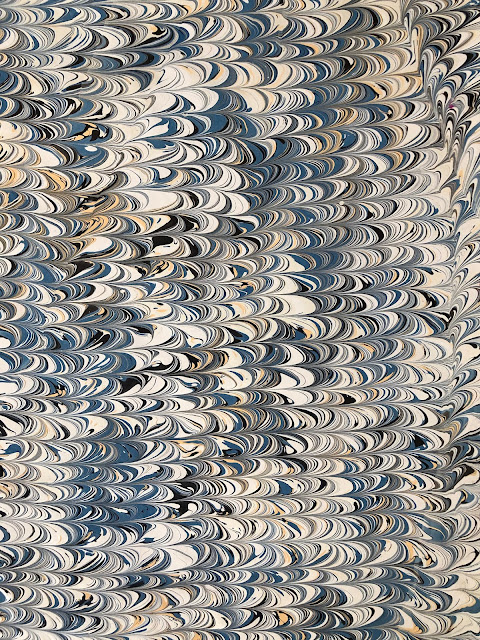 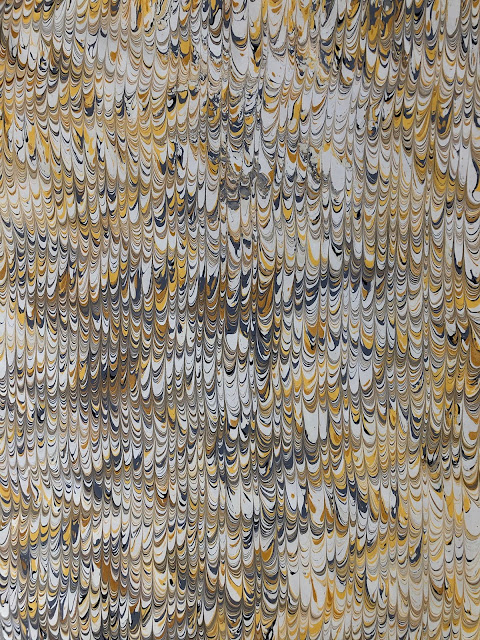 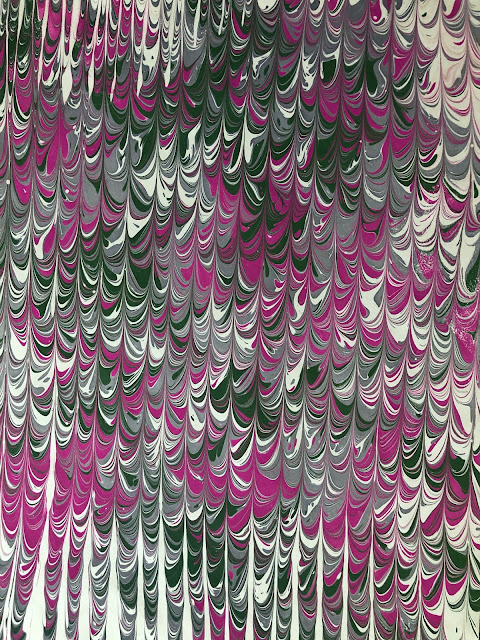 The final method I learnt was called the Shell or Peacock. With a Non-Pariel start instead of drawing the comb in a straight movement, you drag the comb with a zig-zag, S or B movement. Here are my versions of this technique. 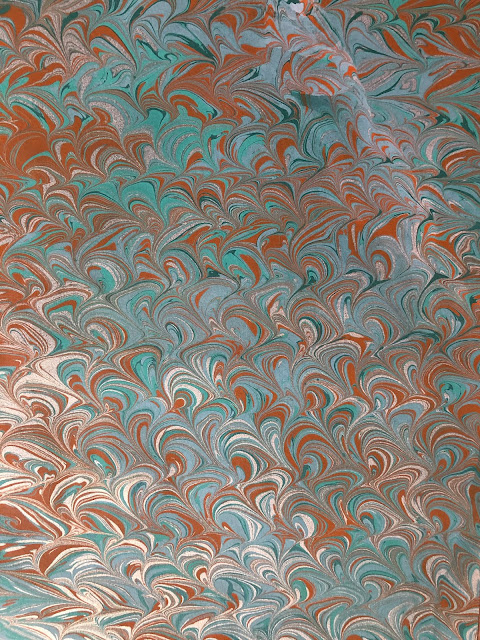 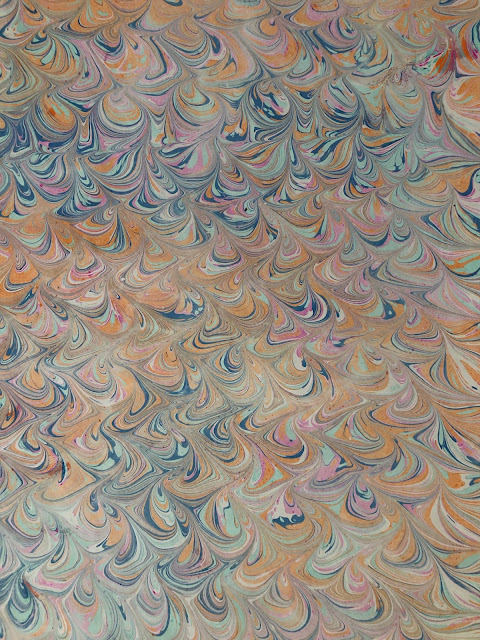 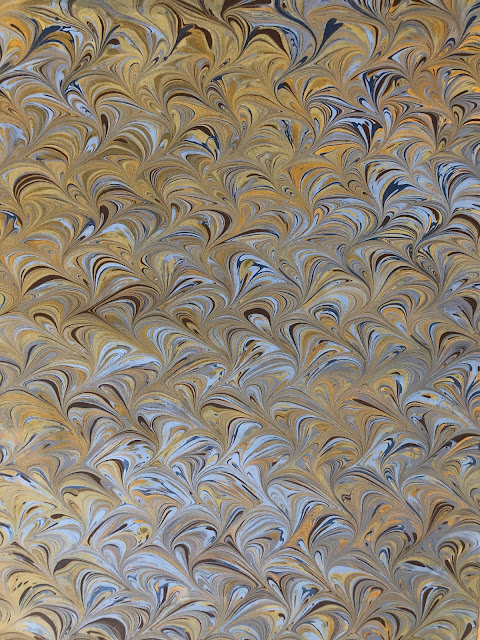 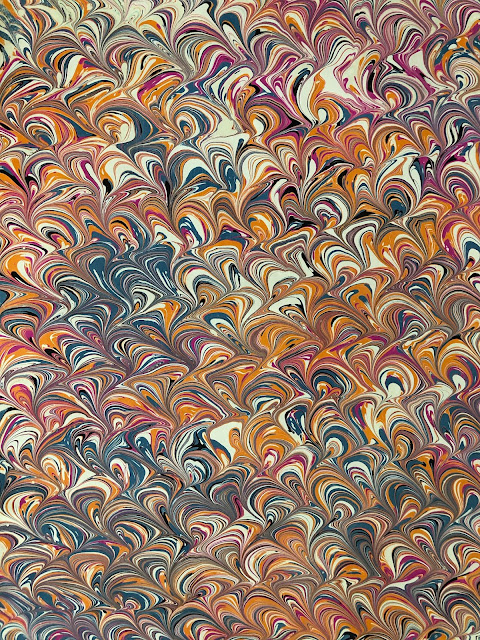 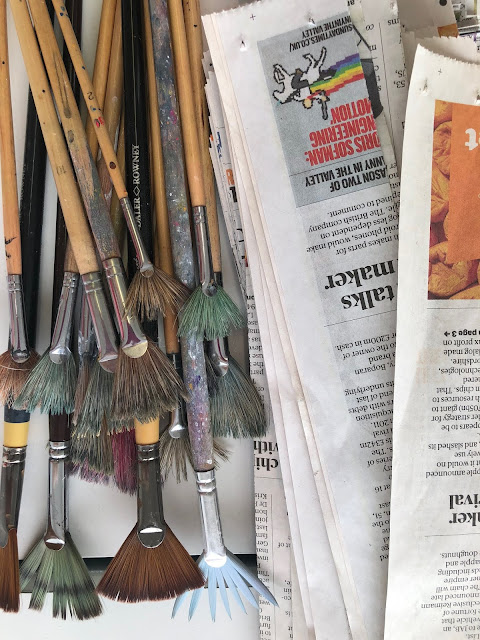 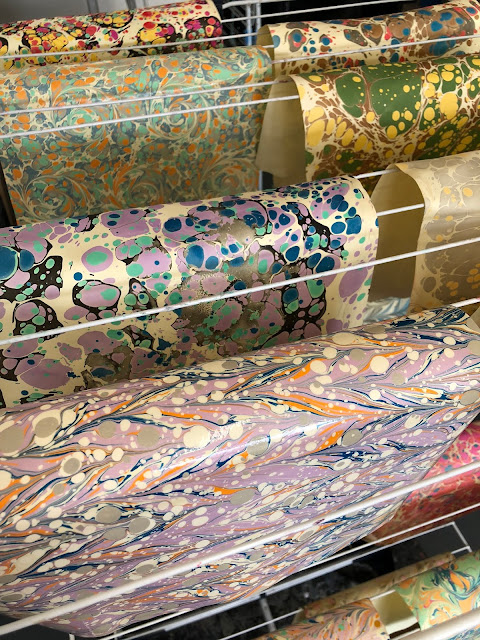 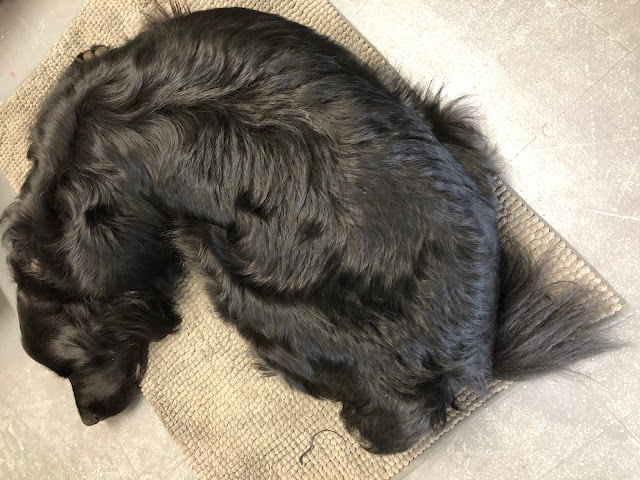 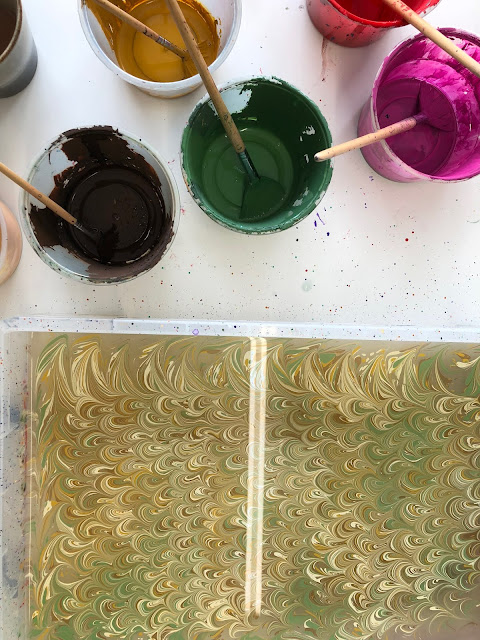 I had an absolutely fantastic time at the workshop and would definitely recommend Paperwilds for a future event. Freya was so friendly and Ludo was a real cutie!
Posted by Caroline at 05:19